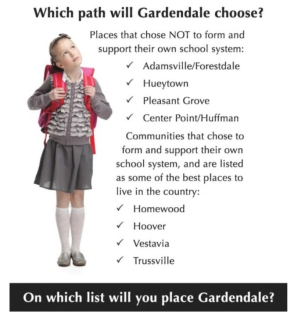 There was big news in the school segregation world, and good news at that! In case you haven’t seen it: a federal appeals court blocked a majority white community (Gardendale, AL) from seceding from a majority black county (Jefferson County) and forming its own school district.

The Gardendale secession has been a topic of earlier roundups (see here & here) and was covered extensively by Nikole Hannah-Jones in the NY Times magazine. For those unfamiliar, here’s a one sentence summary from a recent Mother Jones article:

You read that right- the district court judge acknowledged that the secession was racially motivated and allowed it to happen anyway. The federal appeals court decision (full text here), rescinds the district level ruling, arguing that the secession is a violation of a desegregation order that’s been in place since 1971. Jefferson County’s order was the result of litigation in 1965; so, yeah – we’re still fighting over litigation that is more than 50 years old. Unlike many American communities, Jefferson County’s desegregation order is still in place, and it was the deciding factor here.

Gardendale will now appeal. Here’s what the school board president said:

The flyer depicted here (source: Michael Harriot’s article in The Root) was created by a white parent organizing group that led the secession effort. Its racism is overt: it lists four predominantly black communities (the ones at the top) and then the four predominantly white communities at the bottom are described as “some of the best places to live in the country.” This post from the Education Law Prof Blog describes how the flyer and social media posts became permissible evidence in the case, and it applauds the district court for finding evidence of discriminatory intend, something that is actually quite rare even when evidence appears to be convincing.

Below, I’ve copied the best/most interesting news articles I could find about this. There’s been a lot, so I am likely missing some. Let me know in comments if you’ve come across something good that I’ve missed.

Despite the good news here, secession is a nationwide issue and it continues. Here’s a recent article from North Carolina, where “state lawmakers will begin studying next week how to break up North Carolina school districts, potentially paving the way for splitting large school systems like Wake County and Charlotte-Mecklenburg.” This City Lab article has great background on school district consolidation in NC and the wave of recent de-consolidation efforts. Referring to a recent secession in Halifax county, the article reports that “partitioning the county created ‘a resource competition that the black districts cannot win.'” Partitioning is especially damaging in the South- as Nikole Hannah-Jones noted on Twitter:

This is perhaps one of the reasons NHJ has said that “white folks have to fix segregation.” Along these lines, there were a few thoughtful pieces on the role that white families can play in pushing back against the social/parenting norms that reinforce segregated schooling. This article from Courtney Everts Mykytyn, the founder of Integrated Schools, is a personal reflection on the decision to send her two children to, well, integrated schools. Among other things, she notes:

And, this article from On Being tackles a major issue that holds segregation in place: the problem with seeking the best for your own kids. The article argues that progressive parents should live their values:

The On Being article is a part of a series that will unfold over the next few months. To that end, the author solicits feedback from others “who have made radical decisions outside of social norms, like sending your children to low-performing neighborhood public schools rather than pursuing more privileged options.” She asks: “Do you ultimately stand by your decisions? What did you learn? How have your kids, your neighborhoods, your social worlds been affected?” If you are inclined, you can reach out at stories@onbeing.org.

5 thoughts on “SD News Roundup: School secession updates- the good, the bad and the ugly”